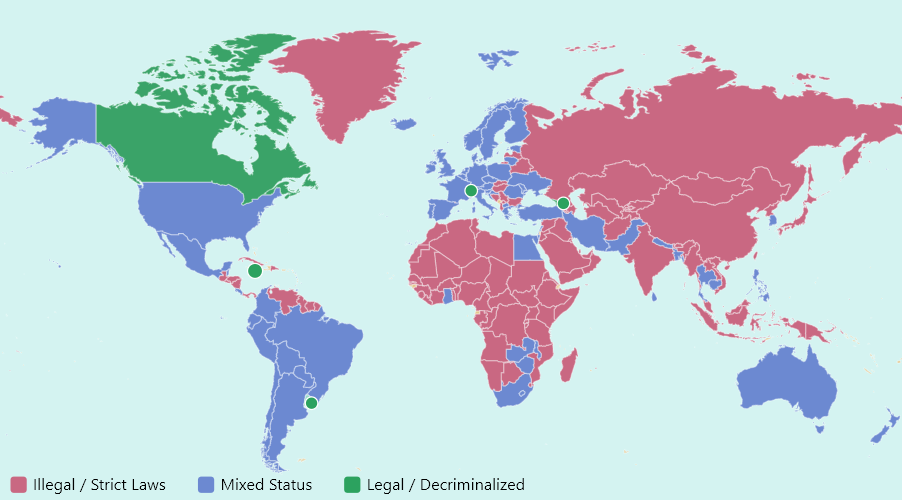 Hover over any country to for details.

Countries with Most Permissive Cannabis Laws

The following countries have passed regulations to legalize or decriminalize recreational cannabis use.

Canada – Cannabis is legal for both medical and recreational purposes, with production and sales regulated by the government.

Switzerland – Decriminalized recreationally & medically legal. Additionally, a trial version of a legal recreational marijuana market was launched in May 2021.

South Africa – Private use and private cultivation decriminalized since 2018.

Jamaica – Decriminalized since 2015, and in 2018 the first medical cannabis dispensary opened.

Georgia – Legal for possession and consumption both recreationally and medically, but illegal for sale.

As of June 2021, cannabis is legal for private, recreational use in Mexico.

Countries with Most Restrictive Cannabis Laws

The following countries have the most strict laws regarding cannabis use, where even small amounts are punishable by jail time (or worse).

Indonesia – Illegal. Possession is subject to a minimum sentence of four years in prison.

Japan – THC is completely illegal, and use and possession are punishable by up to 5 years imprisonment and a fine.

Saudi Arabia – Illegal. Use and possession for personal use of any kind of recreational drugs is punishable by imprisonment if caught.

For more information see our guide to Where in the World is Weed Legal?