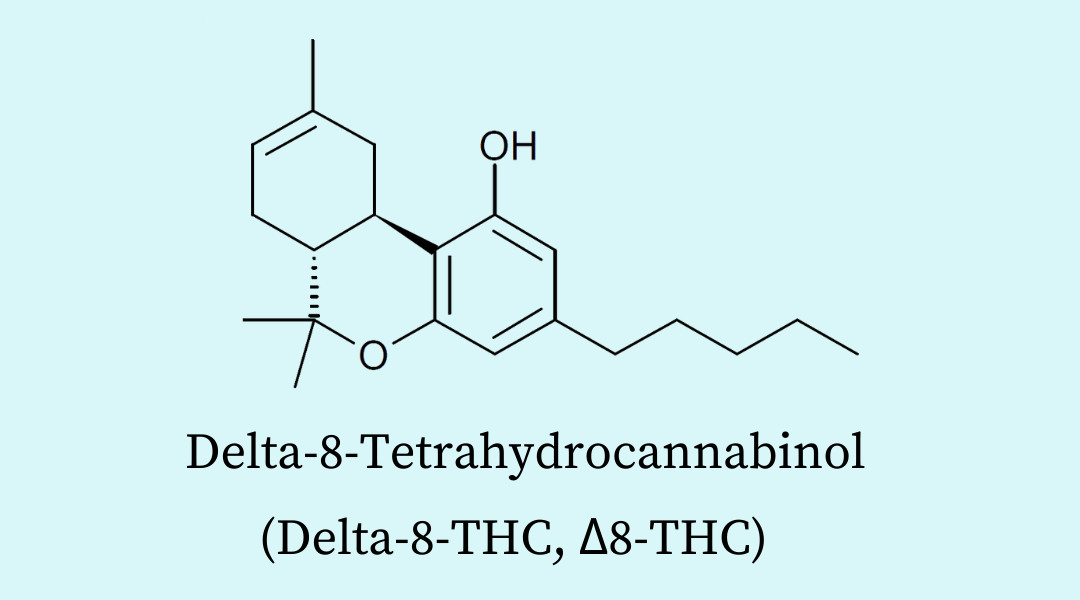 Cannabis is truly an incredible plant we are just beginning to understand. More chemical compounds, outside of CBD and THC, are emerging into the mainstream. Delta-8 THC is just the latest to capture headlines.

This guide will explain what Delta-8 is and answer common questions about it’s effects, legal status and future.

What is Delta-8 THC?

Because Delta-8 THC can be derived from hemp it is considered legal federally in the United States. Not to be confused with the well-known Delta-9 THC, which is categorized as a Schedule 1 Narcotic by the US government.

However, like many cannabis laws, Delta-8’s legal status is far from clear.

The FDA hasn’t officially clarified its stance on Delta-8, giving retailers the freedom to sell products online and in retail stores.

This guide will walk you though what Delta-8 THC is about including it’s effects, legal status and research studies.

Legality is at the forefront of the Delta-8 hype. Because it is considered to be derived from hemp, and the DEA & FDA haven’t made any statement clarifying the status of Delta-8, it remains legal in the United States.

Update May 2021 – New York & Colorado have banned Delta-8 THC and other states such as Michigan are expected to shortly.

The Farm Bill and Delta-8 THC

In 2018, former President Trump extended the existing ‘Farm Bill’ of 2014 to reclassify hemp as cannabis containing less than 0.3% THC. The CBD industry exploded and brought light to all cannabinoids that were now considered legal by the United States.

CBG, CBN, CBC, and Detla-8 THC slowly moved from the contents of cannabis research papers to the product lines of the most popular CBD brands on Earth. Because the ‘Farm Bill’ specifically excludes Delta-9 THC from the definition of hemp, all other cannabinoids gained legal status.

Is D8 a Synthetic Cannabinoid?

The controversy surrounding Delta-8 THC legality comes from how it is manufactured. The amounts of natural D8 in cannabis aren’t nearly enough to be extracted and used to create pure D8 distillate.

Manufacturing companies have to first produce CBD, then convert the extract into Delta-8 THC. The FDA’s definition of a synthetic compound is ‘made by chemical synthesis, especially to imitate a natural product.’

Whether D8 should be considered a synthetic cannabinoid is the determining factor because the FDA has been explicit when classifying cannabinoids made in a lab to imitate the effects of CBD and THC.

In 2020, the FDA adjusted its definition of hemp to exclude synthetically produced cannabinoids. They likely did not have Delta-8 in mind when making this adjustment. Manufacturing companies in other countries, most notably China, are taking advantage by producing synthetic CBD and infusing it into popular products. THC has also been imitated in labs in the form of ‘spice’ or ‘K2,’ avoiding cannabis prohibition.

Today, Delta-8 is considered legal because the FDA upholds the ‘Farm Bill.’ Their definition of synthetics can be debated, but Delta-8 is a naturally occurring compound in hemp and can be produced by manipulating CBD, a federally legal cannabis compound derived from hemp.

Cannabis experts believe that CBG, CBN, and CBC show promise medically, but like CBD, they don’t produce a high. This is where Delta-8 differs from the other cannabinoids gaining attention.

Some Delta-8 users report a clear high, free from the negative effects of THC like anxiety. Many have described the newly hyped cannabinoid as ‘THC light’ or a mild form of marijuana.

Some users report they aren’t as paranoid and feel more in control after using Delta-8 products. However, just like with traditional THC — Delta-8 seems to have different effects on different people.

Our body’s endocannabinoid system (ECS) is why we feel the instantaneous effects of THC and why CBD shows so much promise in treating medical conditions.

The ECS is made up of neurotransmitters, receptors, and enzymes. The receptors that are concentrated in the brain and central nervous system are referred to as CB1 receptors. Those found mostly in other parts of the body, primarily the digestive and immune systems are called CB2 receptors.

When we introduce cannabinoids naturally into the body, they have an interaction with our endocannabinoid receptors. In the case of THC, the brain is instantly flooded with dopamine and serotonin because the CB1 receptor is activated.

CBD is believed to have an indirect effect on the ECS. When CBD is taken regularly, experts believe that CBD inhibits enzymes that stop the production of naturally produced cannabis like neurotransmitters or cannabinoids, that react with CB receptors. Because the CB1 and CB2 receptors produce the benefits associated with cannabis, CBD users indirectly experience relief.

Delta-8 can deliver the user a high because it can directly bind and activate with CB1 and CB2 receptors. When smoked, D8 hits the CB1 receptors in the brain through absorption in the lungs. The slightly altered structure of D8 creates a lower affinity to the cannabinoid receptor, delivering a milder high.

When consumed in an edible, D8 works in the same way as its notorious counterpart Delta-9 — both molecules convert into 11-hydroxy-THC in the liver.

How is Delta-8 Manufactured?

The manufacturing process is where things get complicated with Delta-8 THC. If it was a more abundant compound in cannabis, the FDA would likely classify the cannabinoid with Delta-9 THC, but because it exists in such small amounts naturally it slips by the drug regulatory classifications.

Manufacturers can still create commercially viable amounts of Delta-8 THC from hemp, but some chemistry is involved.

To produce D8 that can be used in products intended to be sold legally, the manufacturer first has to extract CBD from hemp. The CBD is then converted to D8 using a solvent. Pure Delta-8 is in liquid form.

Research and Medical Studies on Delta-8

Delta-8’s ability to directly bind with CB1 and CB2 receptors open up a huge opportunity for medical application. The cannabinoids that are gaining the most attention, like CBG, also have this ability.

However, we are far from understanding the medical potential of Delta-8. While scientists have been able to activate CB1 receptors in rat models, we don’t have the double-blind clinical human trials needed to make any concrete medical claims.

There have been a few studies done with D8, the most exciting is associated with reducing nausea. One study observing a small number of children suffering from complications of cancer medication prone to excessive vomiting was given daily treatments with Delta-8 THC. Every participant of the study stopped vomiting when taking D8 before and after the cancer treatment drugs throughout the study.

The study delivered promising results but is far too small to give us definitive evidence supporting Delta-8’s medical potential. Studies like these are proof that we are far behind in understanding the true potential of cannabis and call for further research.

Why Has Delta-8 Become So Popular?

The popularity stems from producing a high and being derived from hemp, slipping through the cracks of the DEA’s vague control of cannabis products.

Had cannabis been federally legalized, most people probably would have never heard of Delta-8.

Searches for Delta-8 on Google Trends

This graph from Google Trends shows the popularity of the search term “delta 8” in the past year:

Today, Delta-8’s popularity is fueled by cannabis prohibition. The market for D8 is primarily in states that haven’t legalized marijuana. No one would likely give much attention to the minor cannabinoid if recreational use was federally legal.

Interest in Delta-8 by State

This google trends report shows which states have most web searches for Delta-8 in the past year:

As you can see Delta-8 is most popular in Alabama, Kentucky, South Dakota, and West Virginia — states that have not yet passed recreational cannabis laws.

Conclusion: What’s the Future of Delta-8?

As popularity rises, especially in states without recreational marijuana, we expect to see a federal decision on Delta-8 THC and what is considered a synthetic cannabinoid in the near future.

The rise in popularity should lead to further classification by the United States government but, maybe not. We do however have overwhelming evidence that cannabinoids beyond THC and CBD need additional research.

There is a lot of miss-information about Delta-8 and other cannabinoids, mostly from unscrupulous salesmen.

Since there have been very few studies directly researching Delta-8 THC, it is not possible to say if it is completely safe. Meta studies have shown that it raises heart rate, but not heart pressure. But, overall — there is little to no research on long-term effects. Consumers should be skeptical and cautious.

While it is derived from hemp, to be used commercially another step has to take place in the manufacturing process. Skeptics argue it should be considered synthetic.

Where Does Delta-8 Come From?

Delta-8 THC exists in small amounts in cannabis flowers but not enough to be directly extracted and create a product. Any full spectrum THC or CBD extract contains a small percentage of Delta-8.

Does Delta-8 THC show up in drug tests?

Yes. Even though it is a legal cannabinoid, Delta-8 is metabolized similarly to “regular” THC, thus producing the THC metabolites that show up in drug tests checking for cannabis use.

Delta-10 THC is a hemp derived cannabinoid with similar effects to Delta-8 THC, it’s legal status in the United States is also similar to Delta-8.

Studying the business of cannabis.

Michigan retailers broke a marijuana sales record in April, selling nearly $195 million worth of legal cannabis products—even as average prices are down significantly from a year ago.

Since 2014, states have collectively generated over $8 billion USD in tax revenue from legal cannabis sales.